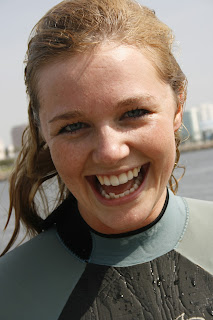 We're delighted to name Emily Penn - world-class sailor, oceans advocate and plastic pollution expert - as the Aquapac Outdoor Champion of 2013. With the title comes a cash award of £1,000 (US$1,600) in recognition of Emily's current achievements and to support her future endeavours.

To find out a little more about Emily we interviewed her during a visit to Cornwall - on dry land, but still suitably close to the edge of the Atlantic.

Aquapac: First off, many congratulations on the award. Tell us a little about who you are and what you do.

Emily: I’m a sailor and I’m passionate about our oceans. I spend most of my time organizing projects and leading expeditions to tackle challenges facing the marine environment. I’m currently running Pangaea Explorations – taking scientists and film makers to remote parts of the planet via our sailing vessel Sea Dragon.

Aquapac: How did you get into sailing and ocean travel? Have you always been an outdoor adventurer?

Emily: I learnt to sail in small boats as a kid in the cold and windy Bristol Channel, and went on to race for the GBR Sailing Team. I gave that up for an architecture degree at land-locked Cambridge University, but when the opportunity for a job arose in Australia I decided to get there without taking an aeroplane. I landed a ride on the world-record-breaking bio-fuelled vessel Earthrace. 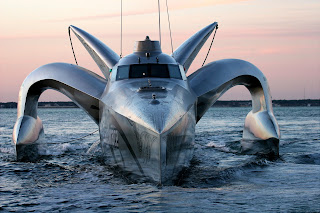 Aquapac: Was it a free ride?

Emily: Not really! I became Earthrace’s Operations Manager, and spent a year running a campaign to promote the use of alternative fuels. We travelled 25,000 miles around the globe talking to schools, media, politicians and the public in 120 cities.

Aquapac: That was quite a trip. So from there how did you get into environmental campaigning?

Emily: It was the journey on Earthrace across the Atlantic and Pacific that opened my eyes to the degrading state of our oceans and the challenges faced by small islands and their communities. After my Earthrace trip, I went back to one of the places we’d visited – the remote low-lying islands of Tonga – where rubbish disposal is a big problem. To help address this, alongside Kiwi charity Sustainable Coastlines, I set up an environmental education program and waste management system.

Aquapac: What did this involve?

Emily: We organised one of the largest clean-up campaigns ever instigated, motivating 3,000 people (70% of the total population) to collect 56 tonnes of rubbish in a single day. Then we diverted a New Zealand freighter to haul eight shipping containers full of rubbish away from the islands. 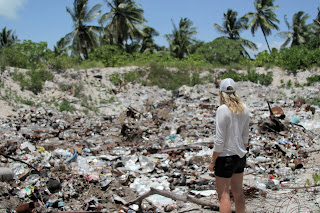 Aquapac: And that led to your next voyage of discovery?

Emily: Yes. After my time in Tonga, I wanted to learn more about marine debris, so I hitched a ride on a freighter to California to meet with plastic pollution experts. I wanted to know more about the great ‘gyres’ that circle each of the world’s major oceans. More specifically I wanted to know more about floating rubbish – mainly plastic – that accumulates in an area in the middle of the ocean and find out where it's coming from, how it breaks down and whether it's getting into the food chain.

Aquapac: So that’s how it all came together. Can you tell us about your most recent or current projects.

Emily: Three years ago we established Pangaea Explorations, and our first mission (in collaboration with the 5 Gyres Institute) was to discover and document plastic pollution in the world’s oceans. We criss-crossed the globe in our ship Sea Dragon, sailing 50,000 miles collecting samples for scientific analysis and providing unique footage to media outlets in order to highlight the issue. We went on to investigate the 20 million tonnes of debris washed out from Japan following the tsunami in 2011, this time in collaboration with Algalita Marine Research Foundation. In 2012 our spectrum broadened, from researching ocean acidification on the Pacific equator with Woods Hole Oceanographic Institution, to anthropological studies on small island communities in Kiribati. 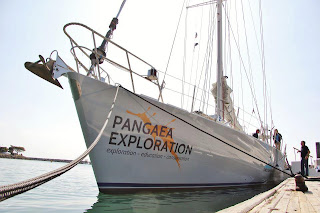 Aquapac: As well as your scientific and campaigning work, we hear you’re also a pretty handy in an ocean-going yacht. Tell us a bit more about this.

Emily: Learning to sail in challenging conditions (which I did from a young age when I was considerably more fearless) and going on to spend time at the helm in four different oceans put me in good stead for my RYA Yachtmaster exam. It was a privilege to be awarded Yachtmaster of the Year by HRH Princess Anne.

Aquapac: Very impressive. It seems your life revolves (no pun intended) around the planet’s great oceans. When you’re not on the high seas, where else have you travelled?

Emily: When I was an architect I spent time in Central America studying Aztec and Mayan art and architecture. In 2007 I wrote a thesis on Shanghai Architecture and travelled from UK to China by train, through the birch forests in Siberia and across the rolling planes of Mongolia. My transition from architecture to ocean adventurer was really driven by my love for non-flying modes of travel that heightened my awareness of the areas between destinations. 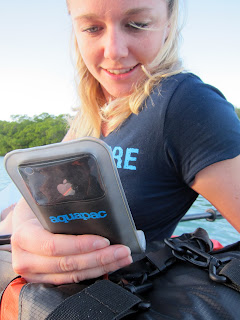 Aquapac: You've certainly had some great journeys – on land and sea. Tell us about the Aquapac products you use when you’re travelling.

Emily: My Aquapac iPad case is essential in keeping our primary navigation device dry on deck every time a wave crashes over the bow of Sea Dragon. I also use an iPhone case, and everywhere I go I use a hard lens camera case.

Aquapac: How did they perform on your recent trips?

Emily: I think you can say they were well and truly tested. In mid 2012, we attempted to land on a central Pacific island, home to 1400 people. It’s surrounded by reef and constant breaking waves but the local fishing boat had run out of petrol so couldn't guide us in. We motored our own dinghy to a gap in the reef with huge waves breaking either side then picked our moment and… go! As soon as the dinghy was through the gap, we jumped out and swam ashore through the breaking waves with Aquapac Wet & Dry Bags in one hand and a petrol can in the other. Drowned rats, we picked ourselves up off the sand and climbed the rock wall to meet our bemused welcoming committee, who shook our hands with beaming smiles. Apparently we were the first visiting yacht crew to land ashore for as long as they could remember. 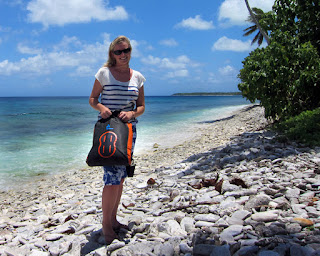 Aquapac: A great experience, and no doubt you've had many more like this. What's been the happiest moment of your career so far?

Emily: You mean apart from being awarded Aquapac Outdoor Champion 2013? Ha! The happiest moments for sure are when I’m living a simple life completely cut off from communications – no phone, no internet, no Facebook. Living on a little island in Tonga in a banana leaf hut, catching or growing my own food, working with the local community, where the daily entertainment is watching a psychedelic sunset so powerful it makes your heart want to explode.

Aquapac: And out at sea, are there any other special memories?

Emily: While filming humpback whales in their breeding ground in Tonga we held a microphone in the water and played the sound of whales singing through the boat speakers. Listening to that while watching them breach off the bow sits pretty high up the list of my special memories at sea…

Aquapac: And what about the scariest memory?

Emily: Being woken up at 6am, on a remote Pacific island just 3m above sea level, by the word TSUNAMI!

Aquapac: That sounds scary indeed. So, when you're not sleeping on remote islands, sailing, researching, campaigning, teaching, inspiring people and travelling round the world - where do you live? 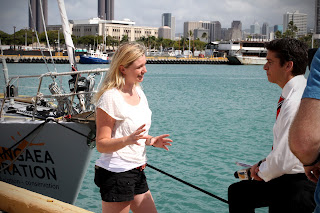 Emily: Well, as you can imagine, there’s not much time to ‘live’ in one place with all that going on. I love the freedom of fitting all my belongings into one duffel bag – which is a lovely stress-free way to live. However, Pangaea is based in Miami so you’ll occasionally find me basking in the warm Caribbean Seas off the South Florida coastline, with my iPad in its Aquapac case so I can work, obviously.

Aquapac: Obviously. And your life sounds a fascinating combination – busy and stress-free at the same time. Tell us about the people that have inspired you to get to where you are now.

Emily: Much of my inspiration is sparked by conversation with the fascinating and diverse mix of strangers I've met along the way. While it’s hard to pinpoint specific people, certainly my time spent in New Zealand was pivotal. The Maori phrase (coined by Pete Bethune of Earthrace) “Kia Kaha, Kia Mana” - roughly translated as “Be strong and make a stand for what you believe in” - urged me to go against the norm and dedicate my life to what I see as important.

Aquapac: You certainly do that. But do you ever give yourself a day off? What do you do to relax?

Emily: I can’t remember my last ‘day off’, as my work and life are completely intertwined, but my true relaxation time comes when I get out my sketchbook and attempt to capture my (usually incredible) surroundings.

Aquapac: Finally, when are you off on your next trip? And where are you going?

Emily: The Galapagos! First, I will be spending a few weeks at Isabela Oceanographic Institute. I’m very excited because it’s on an island I stopped at for a few days on Earthrace and have always wanted to go back. It’s the kind of place you have to watch where you’re jumping into the water to not land on a shark, seal, turtle or stingray. The volcanic rocks are alive with iguanas, penguins and Sally Lightfoots (crazy looking red crabs). Then we will sail to Panama and transit the Panama Canal. I can’t wait to explore and put my new Aquapac products to the test! 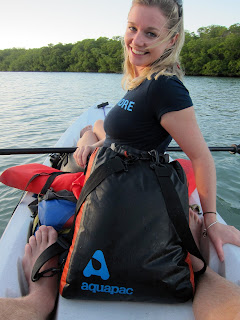 For more on Emily’s work and Pangaea Explorations see: